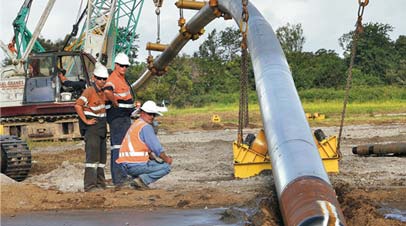 This project was unique as it had to be brought on line quickly due to a critical water shortage facing the region in 2006-07.

Unusually and contentiously, design paralleled construction. At the same time, the community, elected representatives (98 in total), impacted landowners and other stakeholders needed to be informed, consulted (with respect to very limited options on pipeline routes, hours of construction work and other operational matters) and brought along on the journey with minimum stress and disruption.

A positive outcome could be achieved only through the optimal management of, and liaison with, alliance teams and project engineers whose objectives and contractual targets often ran counter to community, environmental and political imperatives.

JTA's work involved rapidly developing an understanding of the industry, stakeholder issues and expectations, and delivering a raft of targeted communications on a sensitive topic to project stakeholders in a short timeframe.

At the same time, JTA was also required to manage and advise on the communication and consultation activities being conducted by five separate alliance teams. Regular meetings, weekly/daily contact and quality control protocols such as a publications-approval process were put in place.

More than 100 WCRW project Weekly Updates were distributed during the construction phase, to more than 150 people associated with the project. These proved to be a valuable reporting tool for ministerial and MP briefings, and informed responses to stakeholders and the media.